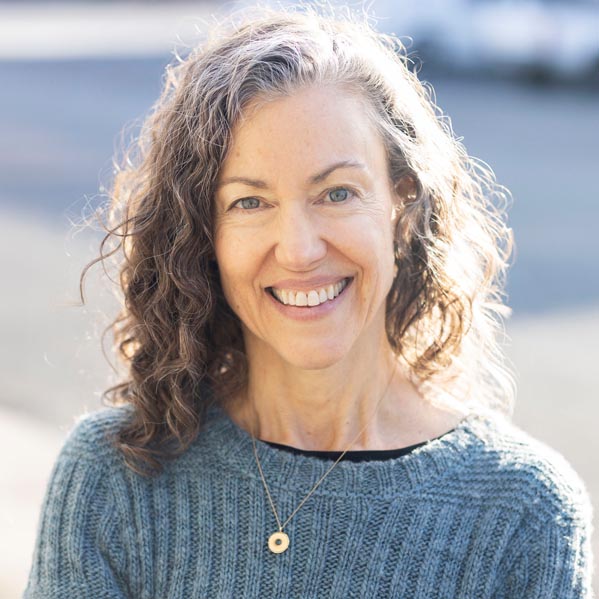 I am passionate about movement. From an active childhood in rural Maine, to dance, swimming, yoga, walking in the city, and hiking in the woods, I have always been drawn to movement as a means of creative expression, as well as a path to physical, mental, emotional and spiritual health and well-being.

I was born with my left leg turned in. When the prescribed braces failed, I was enrolled in ballet lessons at the age of five. I loved dance, and went on to study and perform regularly until age 17, when I was practicing daily.

After college and a graduate degree in French, I explored banking, restaurant work, academia, and high tech. I kept returning to movement and teaching, training as a yoga instructor in 2000, then–with my friend Jennifer (Preisler) Hayes–co-founding a yoga and healing arts center, Yoga Pearl, in Portland, Oregon in 2002.

After more than ten years of athletic yoga practice and teaching, my left hip began to complain about the range of motion I was demanding of it. I believed that hip replacement surgery was in my near future; that it would be the inevitable outcome given my genetic inheritance and the decades of activity I had enjoyed. At about that time, serendipitously, I dropped in on a Feldenkrais class while on retreat at Rancho la Puerta in Mexico. Even though I didn’t particularly enjoy the class (I kept thinking: “No stretching? No sweating? What good could this possibly be doing??”), it made enough of an impression that I signed up for an individual session, and after that hands-on lesson some part of me knew that I would be studying The Feldenkrais Method®: I felt like my tight, aching body had been taken apart and put back together the way it was “supposed” to go. I experienced an ease and fluidity of movement that I hadn’t known in a very long time – or would temporarily after an intense yoga practice or deep tissue massage, but that would eventually “rebound” into tightness and soreness – and the practitioner had handled me so gently! This was something I needed to learn for myself, and was eager to share with others.

After selling Yoga Pearl in 2012, I studied and practiced The Feldenkrais Method® full time, completing my Feldenkrais Professional Training Program with Dr. Frank Wildman in June, 2014. I am grateful to be learning daily about the myriad benefits of the method, as well as to have the privilege of helping others learn to address and avoid injury, develop self-awareness, and effort less.