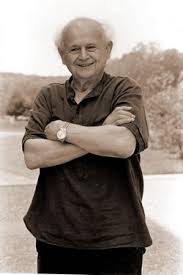 Moshe Feldenkrais was born on May 6, 1904, in what is now Ukraine. He traveled with a group of young pioneers to the British Mandate Palestine at the age of 14, worked as a laborer and finished high school. In his 20s moved to Paris where he studied engineering and physics. There he met and began studying with Jigoro Kano, the founder of Judo, receiving his 2nd degree black belt in 1938.

He fled to England during World War II, becoming a scientific officer in the British Admiralty, then continuing his study and publication in the subjects of martial arts, education, psychology and the fledgling field of somatics.

Feldenkrais moved to Israel in the early 1950s. He eventually established ongoing group lessons in his method on a street in Tel Aviv named Alexander Yanai (these are now referred to as the “Alexander Yanai Lessons”) and counted among his individual lesson students none other than Israeli Prime Minister, David ben Gurion. He trained teachers in Israel, then San Francisco in the mid-70s. He started a 235-student training in Amherst, MA in 1980, but fell ill and was only able to teach for the first two of the four-year program.
He died on July 1, 1984.

For a more detailed biography of this extraordinary man, visit the FGNA website.
David Kaetz’s Making Connections is a fascinating study of the significance of Moshe’s Jewish heritage.